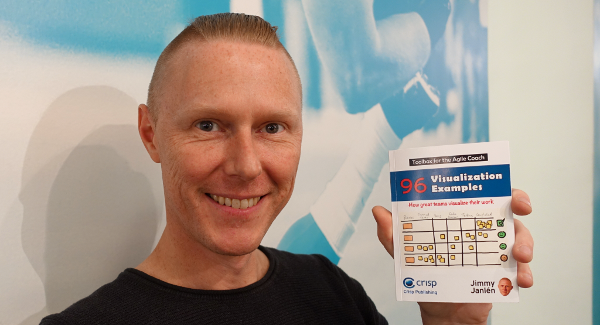 I love visualization and I collect visualizations. Why? Well, I love drawing and have a very visual way of thinking. But more importantly, I’ve been amazed time and time again, how great an impact a valuable and useful visualization can have on a team’s ability to focus, collaborate, and adopt new behaviour.

This passion for post-its and whiteboards finally manifested itself in the form of a book; “Toolbox for the Agile Coach: Visualization Examples – How great teams visualize their work”. Not only am I proud and happy of the final result, I’m also very excited about the way it came about. This blog is about how I wrote a book, publicly and collaboratively online, with frequent increments and tight feedback loops.

Warning, this is a pretty long article. Not necessarily because it’s a long story or contains great wisdom, but because I obviously had a lot of things I wanted to share. Continue reading on your own risk.

How I got started

I can’t remember the exact moment when the idea to write a book came about, probably because the idea has been lingering in the back of my head for so long. I however know what the trigger was. My friend and colleague Henrik Kniberg stepped out of our 3 hour flight from our Crisp conference in Iceland. While getting our luggage he enthusiastically shared that he spent that flight writing the whole second version of Scrum & XP from the Trenches. I had been watching a Marvel movie, can’t remember which. I enjoyed the movie, but that was it. No more procrastination!

That same evening I wrote a first sample page. The structure of the book was obvious for me; each page depicted a visualization example. A big nice picture, and some descriptive text explaining just enough to trigger some ideas or inspiration. I decided very early to focus on concrete examples and to avoid complicating things by getting lost in theory, discussions, storytelling or abstract concepts. I wanted it to be a fun book to read, and a fun book to write.

How I selected a tool

I tried using LeanPub. Deliver early and often, right? However, LeanPub’s format couldn’t match what I wanted in terms of layout and pictures, so I quickly abandoned it and opened MS Word.

During the next few days I wrote some more pages and drew the illustrations. I converted the document to pdf and asked my peers at Crisp for feedback. I got some, but not much.

I tried out some different front page designs and printed it to get a feel for how it could look.

My colleague and friend Hans Brattberg claimed he had a lot of feedback but would not give it to me unless I converted the book to a Google Drive document (or similar) which would make it easier for him to share his comments. I thought – “Which serious writer-wannabe writes a book in Google Drive?” And besides, I was already up to 12 pages.

So I wrote some more pages.

But since I also desperately wanted feedback I eventually decided to copy what I had so far into Google Drive Slides. I shared that document with my colleagues and some more friends, and received great feedback! Providing feedback and suggestions in Google Drive is frictionless. It’s designed for collaboration! I happily abandoned my MS Word document.

Wait a sec! Some of you might say. Why Google Slides and not Google Docs? The simple answer is that I master MS PowerPoint/Google Slides, not MS Word/Google Docs. And the book is highly visual. Lots of colors and illustrations. That’s why! Moving on.

Why I decided to write it online

Then it hit me; I could leverage the online collaborative powers of Google Drive. What if I made the book public while I wrote it, making it possible for anyone who wanted to provide feedback, suggestions and help out with spelling and grammar? I could deliver iteratively and incrementally, getting fast feedback from readers and maybe generate a buzz around the book at the same time.

I rejected my doubts, and ignored the advice some people gave me that you shouldn’t give away the book for free, wait to publish it until it’s finished. Why would anyone pay for a book they’ve already read the alpha or beta version of?

From this point on – for every new page I wrote I tweeted about it (and posted on Facebook and LinkedIn). I invited people to read it and give feedback. I even allowed people to download the book as a pdf for free! If you were unlucky (or lucky) you could even catch me writing new pages.

How I collaborated with others online

This approach was awesome. I got instant feedback. I was truly motivating to experience how people engaged and helped. A small community emerged around the project with people who were excited about every new page and loved to contribute. Some comments spurred great discussions and literally flooded the comment fields.

For several months, at any given time, there were ten or more people reading and reviewing the book. Sometimes as many as forty. Many of the reviewers also provided suggestions on more visualization examples I should add to the book, some of which actually were included.

I can’t thank all of you who engaged enough! I’m really crappy at seeing things through so I’m not sure the book ever would have been completed without your help!

I tried to engage every day in the discussions. Approve or reject suggested changes. Reply to comments. I did my very best to show appreciation and acknowledge everyone’s contributions.

I also felt I wanted to be transparent. The last two pages of the online book contained a change log and a progress page. The progress page stated velocity, a burnup chart and a projection of when the final page would be written. I created an excel sheet where I logged how many examples I had written, and how many more I wanted to write. This fed the burnup graph. Based on my average velocity the last 40 days a forecast date was calculated.

If you work as an agile coach – you of course practice what you preach.

Why I choose not to go with a publisher

I have friends who have written books and got them published by highly regarded publishers. This comes with great many benefits, but also with a lot of additional work and loss of creative control.

The reason I choose to self-publish without help from professional editors boiled down to three things.

Reason one. If you go through an established publisher they will provide you a professional editor who won’t give up until every page and every wording is a great as it can be. My book would probably have benefited from that, but I simply did not have the patience for it. Most professional publishers don’t work iteratively with fast feedback loops.

Reason two. I know that some publishers won’t allow you to even choose a photo for your cover. I liked the way the book looked. Maintaining creative control was important to me.

Reason three. I suspect that a publisher wouldn’t allow me to write the book publicly online. I mean, it doesn’t sound like a smart move from a sales perspective to give it away for free while in production right? (Parts of me get that… For example, it’s hard to imagine a movie being made that way. First a 1 second trailer. Then a 10 second trailer. Then 1 minute. 10 minutes. And then it gradually grows into a complete 2 hour movie. Would anyone even be interested to pay for it when it goes up on the big screen?)

The journey up until the release party

I think the book took roughly 6 months to write. I wrote on average three to five pages a week. While writing the book I also travelled a lot. Some of the examples were written in places like these…

Eventually the book was finished in August 2015. I “camped” for three straight days in our sailing boat in the Stockholm archipelago. This is how happy you look when you’ve finished the final page.

I almost aimed for a total of 101 examples, but eventually decided to settle with 96. I converted the pages from Google Drive Docs to MS PowerPoint. Tweaked the layout. Polished the design. Did a couple of additional grammar and spelling feedback rounds with selected people. Converted to pdf. Got it printed.

Wait! What? Are you saying that the final layout and design is done in PowerPoint!?
The answer is yes. Get over it. Moving on.

Converted to pdf. Got it printed. Started selling the book in December 2015, both on Amazon and LeanPub. The first 100-ish physical books were actually shipped from New Zealand since we were living in Auckland at the time.

When we got back to Sweden in May 2016, I finally held a proper release party with friends and colleagues at the Crisp office in Stockholm. The signing queue wasn’t that long but rumor has it that there were some fighting going on in the queue. Win 🙂

The book has since the release been translated to several languages. First out was the Dutch translation. Yves wrote a great article about the way he and his network approached this. Very inspiring! Then came Japanese, Polish and Swedish. More translations are on their way.

When (if?) I write my next book, I will probably do it with the same inclusive collaborative approach (unless I, for some reason, decide to go through an established publisher). I loved it and I got to know a lot of new great people.

If you are curios about the actual book you can buy it here or here.

If would like for me to come to your company to do an inspirational seminar followed by a team workshop, contact me me and let discuss how we can make that happen.

Thanks for reading this far 🙂 Hoped you enjoyed it!

If you have more questions on anything I failed to cover in this long article, don’t hesitate to post them in the comments below.