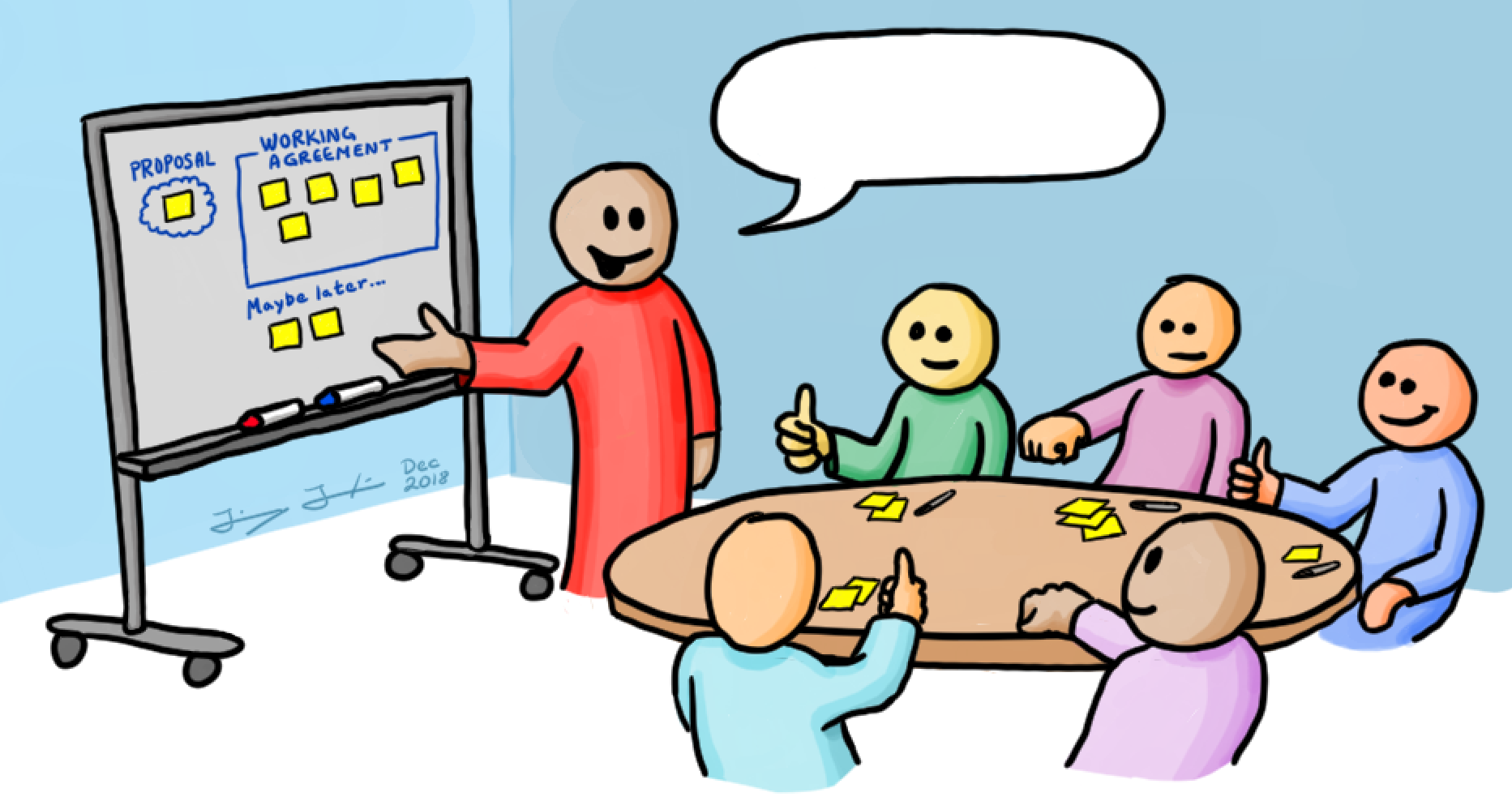 I suspect that running a session with a team to help them bootstrap a Working Agreement, is the single most common workshop I’ve been facilitating the last couple of years. And I’ve learned a lot of what works for me (and what doesn’t work). In my experience, this approach works equally well for the agile team, the department management group and the steering board team. This blog is me documenting how I ended up facilitating these sessions.

For me, a Working Agreement captures the expectations we have on each other within the team when we collaborate and communicate. I’ve seen teams call it “Code of Conduct” or “Ways of Working”. I call it Working Agreement. You call it whatever makes sense for you.

Running a Working Agreement workshop as early as possible is crucial for setting the team up for success. Preferably it’s done during the team’s two-day kick-off offsite, or at least within the first few weeks as a planned structured workshop.

If possible, I try to be a few minutes early into the meeting room to be able to prepare the whiteboard (as in the illustration above), and to make sure there are enough Post-its and Sharpies to go around.

Proposal under discussion is put in the bubble. Agreements are then then moved to the “Working Agreement” area. Parked proposals are moved to “Maybe later…”

I’ve found that a 90 min session is lengthy enough to create a good first version of a Working Agreement, and not too long for people to lose interest and energy. I usually structure it like this:

I usually open the workshop with just welcoming everyone to the meeting and then jump straight into a Check-in round. I do this to get everyone a chance to say something as early as possible and to create a relaxed atmosphere.

You can ask any question you want to, and feel is appropriate, but I tend to default to “What is your personal expectations on this upcoming workshop” or “What state of mind were you in as you came into the room and sat down on that chair?”

Once I’ve posed the question, I ask someone to start, and then continue clockwise around the room until everyone has shared. (If someone goes on for too long, I tend to say something like “Thank you for sharing, but could we try to keep the check-in answers shorter moving on?”)

I then continue to explain that we now will create our first version of our Working Agreement together. It will establish a baseline of what behaviours we want to see, captures our expectations on each other and defines what we should be able to hold one another accountable for. By creating a working agreement, we create an understanding of what is important for us in order to be able to work well together as a team.

I then explain that we soon will get 10 minutes to write down bullets we would like to see in the Working Agreement. These will be proposals that you get a chance to explain and that we will vote on together. I then give them a few pointers and guidelines:

These seem like a lot of things to explain, but I don’t say much more than what’s written above. I’ve learned that being clear on the instructions is crucial for helping the team successfully bootstrapping a Working Agreement and helping the team have valuable, useful and concrete discussions around the proposals.

Then I shut up for ten minutes to give people time to formulate their proposals for the Working Agreement. If everyone seems to finish early, I ask if they feel happy with what they’ve got and want to continue, or if someone would like a few more minutes. I’ve noticed that some people only manage to write one or two Post-its, while others have a stack of twelve in front of them. That’s totally ok. It’s can be tricky to formulate observable positive behaviours, especially if this is the first time doing it.

Agreeing on the Working Agreement

And then it’s time to go through the proposals and vote on them. I choose a person by random, usually by spinning a pen on the table. I ask that person to start by picking ONE of his/her proposals, stand up, and bring that one proposal and put in inside the thought bubble I’ve drawn on the whiteboard.

First, I ask the person to read out what the Post-it reads – load and clear. Then I ask him/her to briefly explain why this is important to him/her. And then I turn to the rest of the group asking them if they have any questions of clarification, if there’s something in the proposal they don’t understand. I ask them to not reveal their opinion about the proposal just yet, we will do that through the voting, but to make sure they understand the expectation or behaviour formulated on the Post-it by asking questions.

If no one has any questions I usually inject some of the following questions, giving the person standing up by the whiteboard a chance to answer them one at a time.

I ask these questions to ensure that everyone gets a better and deeper understanding of what it would mean to have the bullet as part of the working agreement.

Once I feel the group understands the proposal I continue to the voting. Sometimes no follow up questions are needed at all, the proposal is super clear and obvious.

I explain that we will vote with our thumbs. “On a count to three, you reveal your vote. Not earlier. We don’t want to prime each other.”

Thumb up means: Yes, I like it AND I believe I will be capable of honouring it.

Thumb down means: No, I believe this would be bad for us as a team – or – No, I don’t believe I’m capable of honouring this at all.

Thumb sideways means: Sure, if there are no thumbs down, I will accept this being in our Working Agreement. I would however like to share a thought or concern.

Closed fist means: This specific principle doesn’t apply to me or my work, so I abstain. I will let the others decide. I’m okay with their decision and will respect it.

Once I’ve explained the voting, I count down from three “Three, Two, One, Vote”.

If there are now thumbs down, I proclaim “Great! We have added our first bullet to our Working Agreement. Let’s applaud this decision with a one-clap-applaud!”

Doing a synchronized one-clap-applaud is tricky, but always gives raise to a few laughs and giggles. Groups usually gets better at this after some practice.

I then move the Post-it to the Working Agreement section of the whiteboard. If there are thumbs sideways or closed fist, I now ask them to share why they voted sideways or had their fist closed. I clarify that the bullet has been decided but that it would be valuable if they would share why they voted the way they did. I ask them to keep it short and that this is not the moment to reopen a debate. If you don’t want it in the Working Agreement, you vote thumbs down.

Then I ask the next person to pick one of his/her proposals and approach the whiteboard, repeating the process.

If there are one or more thumbs down the proposal didn’t go through. I ask the people to share their perspective on why this would be a bad thing for the team to have in the Working Agreement. This usually trigger some great discussions and many times the team reaches a shared understanding, finding a way to reformulate the proposal so that everyone is happy with the formulation. However, if the group fails to decide on a new phrasing within 4-5 minutes, I do a time-out, stopping the discussion. I state something in the lines of “Even though several members in this team want this bullet in the Working Agreement, we also have some friends who don’t want it there. I don’t see us being able to agree upon this one within the next few minutes. I propose that we park this one for a future discussion and continue with the next proposal. The game for today is to find as many bullets that we agree upon as possible in order to have a stable ground to build further discussions on.” And then I move the Post-it to the “Maybe later…” section of the whiteboard.

This continues until the timebox is up. I try to close this part of the exercise so that I have 10 minutes left for the last two topics of the agenda. I make sure that the group is aware of the time that is left so that the ending doesn’t come as a surprise. I might even try to estimate how many more proposals we’ll have time to cover when being halfway through the timebox.

First, I ask the group to applaud their own effort of bootstrapping their first Working Agreement with a proper applaud. Then I read the agreed upon bullets out loud, high and clear. I do this to reinforce the decisions made and to remind the group of what they’ve decided upon.

Before moving on to the Check-out I ask the team how they will capture and document their Working Agreement. Will they move the Post-its to their Team Room? Document in Google Docs? Who will do it?

And to wrap up the meeting and the exercise I do a Check-out round, asking the team to take turns answering the question “Which bullet in the Working Agreement do you think will make the biggest difference? Which one is your personal favourite?”

A Working Agreement is a living document and deserves continuous attention, love and care. Make it visible in the team area. Make sure to share it to new team members. Bring it to the Retrospective so that you can extend upon it. A retrospective is a great time to bring up proposals that didn’t make it, or that we didn’t have time to cover. You could also dedicate a whole retrospective to discuss and evaluate how good you are at honouring the different bullets. Perhaps some deserve to be rephrased. Some might even feel obsolete and maybe should be removed.